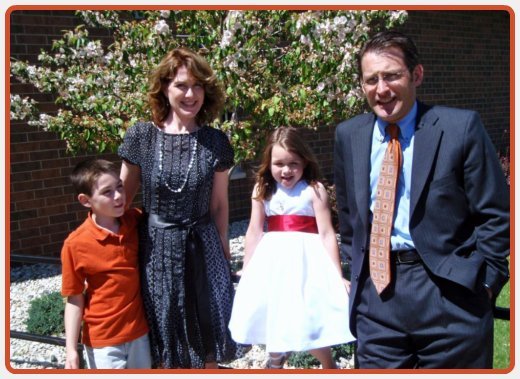 Do you have kids,Â grand kids, or nieces and nephews who have knocked your socks
off making you proud?

I tease my son-in-law, Brad Vick, married to our daughter, Jackie,
pictured above with son Charlie and daughter Hallie, that he’s my
favorite son-in-law. He is our only one, but every time we get together,
IÂ have toÂ say it at least once.Â I adore him, his dry wit and humor always
sparking a rise out of me.Â He lives and emulatesÂ positive psychology.

He’s at the top of my “men I respect”Â list.

He wouldn’t tell you about his recent honor, but I am bustin’ my britches to tell
you about Brad’s dedication to humanityÂ and his super accomplishment.
He has won the Leukemia & Lymphoma Society 2011 Man of the year award.
He’s aÂ man who translated tragedies, the loss of his dad and brother to cancer,
into meaning and hope.

Congratulations, Brad. I know your dad and brother, exquisite men, too,Â are
smiling down from heaven.Â They passed the torch to you, and you fired up
so many people to contribute to saving lives. If you want to read about Brad’s
award you will find the entire article, in all its glory, written below.

How about you?Â  What canÂ you do to make a difference?

THE LEUKEMIA & LYMPHOMA SOCIETY ANNOUNCES
2011 MAN & WOMAN OF THE YEAR

Local Leaders to Raise over $180,000 to Fight Blood Cancers

June 17, 2011- The Minnesota Chapter of The Leukemia & Lymphoma Society
(LLS) is pleased to announce the Man & Woman of the Year. The winning candidates
were Brad Vick and Michelle Jaeger.

Brad Vick, a Wealth Management Advisor with Northwestern Mutual Wealth
Management – Bohannon Group, won the title of Man of the Year by raising
$52,000 for LLS. Brad accepted his nomination to honor his late brother Tom
Vick, who lost his battle with acute lymphocytic leukemia in 2004.Â  While he was
being treated, Tom met many children who were battling cancer.Â  It was his wish
to find a cure, so little kids would not have to go through treatment ever again.

Michelle Jaeger, an Executive Director with Medco Health Solutions won the title of
Woman of the Year by raising $37,000 for LLS.Â  Michelle decided to take part in this
campaign because she wanted to give back to patients and families battling blood cancers.
She also wanted to help celebrate the five-year remission mark of her friend Scott Gilyard,
and to honor the memory of another friend’s mother.

The winners were announced at a Grand Finale at the Sofitel in Minneapolis.
Together,Â with twelve other candidates raised a grand total of $180,000 to
advance the mission of LLS: Cure leukemia, lymphoma, Hodgkin’s disease and
myeloma, and improve the quality of life of patients and their families.

As the Man & Woman of the Year, Brad Vick and Michelle Jaeger will be pictured
with the Boy & Girl of the year in twenty Metro Transit bus advertisements which
will run for the month of September. Most importantly, all of the candidates’ hard
work, generosity and passion for the cause have helped fund life-saving cancer
research, and has made a difference in the lives of blood cancer patients everywhere.

“The Man & Woman of the Year program is a great way for candidates to network
with other influential people in their communities while also helping to bring hope
to thousands of blood cancer patients,” said Murray Schmidt, the Minnesota Chapter’s
executive director. “Candidates get to showcase their fundraising and community
outreach skills as well as their humanitarianism.”

To learn more about Man & Woman of the Year visit, www.mwoy.org/mn.

About The Leukemia & Lymphoma Society

The Leukemia & Lymphoma SocietyÂ®, headquartered in White Plains, NY, is the
world’s largest voluntary health organization dedicated to funding blood cancer
research and providing education and patient services. The LLS mission is to cure
leukemia, lymphoma, Hodgkin’s disease and myeloma, and to improve the quality
of life of patients and their families. Since its founding in 1949, LLS has invested
more than $680 million in research specifically targeting leukemia, lymphoma and
myeloma.Â  LLS has a local Patient Services Manager in 68 chapters throughout the
United States and Canada. For additional information, please contact LLS
at (800) 955-4572 or visit www.LLS.org.

P.S. Judy loves to hear your comments.
Feel free to send her questions you may have!
You can also connect with Judy on facebook, LinkedIn, or follow her on twitter
http://www.facebook.com/drjudykrings